Mike Larsen is a painter and sculptor of history. Researching the people and events he paints and sculpts, he spends much of his studio time in books and on the internet, researching - historical accuracy being as important as his palette. He creates paintings and sculpture commissioned by Governments, Corporations and Individuals located throughout the United States.

Mike’s love for painting and sculpting dancing figures began in 1991 when he was commissioned by the State of Oklahoma to paint a 26-foot-long mural for the Capitol Rotunda of five internationally prominent ballet dancers, all born in Oklahoma, all Native American. It is titled "Flight of Spirit". His love of painting Native Peoples comes from his Chickasaw Ancestry in whose "Hall of Fame" he was installed in 2000.

From 2000 to 2004, Mike painted·eight murals - four about teaching the arts and four about local Native American History - for the Oklahoma Art Institute, located at Quartz Mountain, Oklahoma. That was followed by six murals commissioned by the University of Oklahoma Reynolds Performing Art Center and School of Dance.

2006 brought the United States Postage Stamp for the 2007 Oklahoma Centennial. An image of The Cimarron River about a mile south of Perkins, Ok, was painted with the title "Oh What A Beautiful Morning". Mike's smallest painting to date!

Also in 2006, Mike was commissioned by the Oklahoma Centennial Commission to create two larger than life size bronzes that honors the arts in Oklahoma. They are located at the Oklahoma City Civic Center Music Hall. They were unveiled in 2007.

In 2008, Mike completed the two-year project of eight murals for the Pokagon Band Potowatomi Tribe in Michigan.

Perhaps the project closest to his heart is the Chickasaw Nation's Living Elders project - 72 portraits of Elders of the Nation. This commission was begun in 2005 with 24 portraits and has continued with two more groups of Elders. The latest group of portraits were installed at the Chickasaw Cultural Center in the fall of 2019

Mike completed a public commission for a twice life-sized sculpture for St. Joseph's Regional Health Center in Patterson, NJ, in 2009. This bronze honors the caregivers and care receivers at the health center.

In the Fall of 2012 Mike completed "The Arrival" for the Chickasaw Cultural Center. It is a nine foot bronze representing the new start of a Chickasaw multi-generaltional family after removal from the Homeland. In 2017 he completed another twice life bronze entitled “Victorious” for the Chickasaw Conference Center.

In 2021, Mike was commissioned to create a monumental size bronze of retiring President Burns Hargis to honor his service to Oklahoma State University. The bonze was unveiled on September 9, 2022 and is located on the east side of the Library Lawn.

Mike and Martha were married in 1990 and raised their children in Oklahoma City. As Mike's assistant and collaborator on projects through the years, Martha has brought her background in art, business and photography to the partnership.Becoming empty nesters, they moved to rural Oklahoma in 2004 where they have their respective studios and always meet on either the front porch or in front of their fireplace at the end of the work day.

2021 to 2022 - Commissioned to create a monumental sized bronze of retiring President Burns Hargis to honor his service to Oklahoma State University. The bronze was unveiled on September 9, 2022, and is located on the east side of the Library Lawn

2019 – Opening of the exhibit “Listening to Our Elders”, 24 portraits of Living Elders of The Chickasaw Nation, Chickasaw Cultural Center

2017 – Named a Board Member of the Oklahoma Hall of Fame

2017 - Two Man show at the Oklahoma Hall of Fame with fellow hall of famer and artist H. Holden titled "Cowboys and Indians"

2017 - Publication of his autobiography "Don't Never Be Afraid of Your Horses".

2012 – Dedication of “The Arrival” at the Chickasaw Cultural Center

2011 – Commissioned by The Chickasaw Nation to create a monumental sized bronze for the Chickasaw Cultural Center titled “The Arrival”.

2009 – Opening of the exhibit “I am Very Proud to be Chickasaw”, Oklahoma Historical Society, November, Oklahoma City

2007 – Opening of the exhibit “They Know Who They Are”, Oklahoma History Center, November 2, Oklahoma City

2006 – Commissioned by the Chickasaw Nation to create a second set of 24 paintings of Living Elders.

2005 – Commissioned by the United States Post Office to create the stamp for the Oklahoma Centennial, to be issued in 2007

2004 – Six Murals commissioned by The University of Oklahoma for The Reynolds Performing Arts Center and the O.U. School of Dance

2003 – Commissioned by National Bank of Commerce for the first in a series of “Oklahoma Artists”.

2001 – The Young Dancer, commissioned for the Oklahoma City Art Museum.

2000 – Inducted into the Chickasaw Hall of Fame. 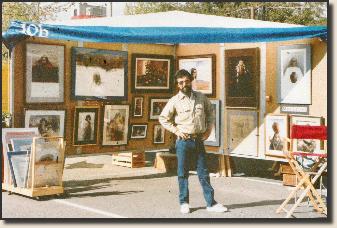 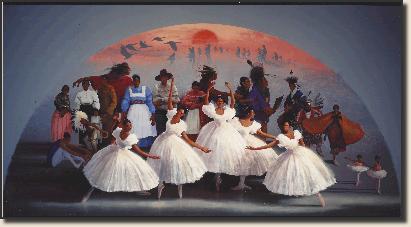 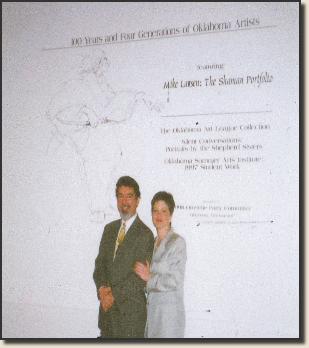 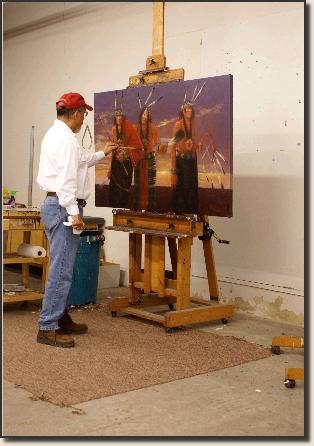